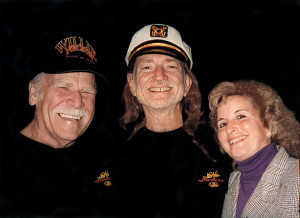 The Willie Nelson and Friends General Store & Museum was founded July 4th, 1979 in Madison, TN with Willie’s good friends Frank and Jeanie Oakley as the storekeepers. The General Store began life as a local art & picture framing store that Willie frequented often while visiting his friends and staying at his cabin in Ridgetop, Tennessee. 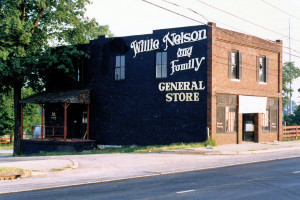 As a result of his visits, the art shop quickly amassed a large display of framed artwork and photographs of country music stars as well as a lot of Willie memorabilia and souvenirs. In the fall of 1979, Willie was voted country music’s highest honor – “Entertainer of the Year”. And before long more people were coming to see the Willie items than those looking for picture framing…and so the Willie Nelson General Store was born.

And what a store it was…full of fun but certainly not what you generally expect to find. Sure, we sold souvenirs but in those days we were known as much for our parties as our souvenirs. Storekeeper Frank Oakley was always quick to dream up a new party. A few examples of his brainstorms included our:

“Bloody Mary Morning” parties we held during the CMA Disc Jockey Awards week festivities that were held in October of each year. Although probably not legal, we served free Bloody Mary’s on Wednesday and Thursday nights from 10:00pm until 1:00am. There was never a dull moment at these events! 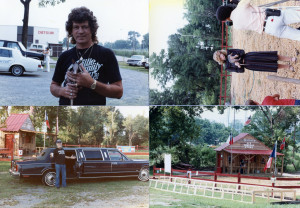 Nashville’s first (and only!) armadillo race staged at the Willie Nelson General Store.

And who could forget Nashville’s first Armadillo Race? And yes, these too were held at the General Store. Ol’ Frank even brought in some live armadillos from Texas for the big event and gave away free hot dogs and beer to all who attended.

Those were great times and very special because you never knew who might show up and hang out at the General Store. We (and our customers) were fortunate to meet and spend many memorable hours with legends like Faron Young, Charlie Dick (Patsy Cline’s husband), Mac Wiseman, Webb Pierce, Billy Walker, Roy Acuff, Jim Ed Brown, Hank Cochran, Del Reeves, Floyd Tillman, Patsy Montana, and of course, Willie Nelson.

We also held many other events over the years including:

— Hosted filming of the Crook and Chase TV show. 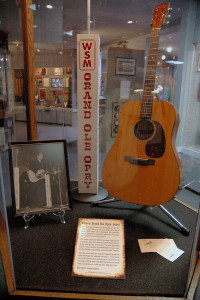 Willie Nelson’s first Martin guitar used on his Grand Ole Opry debut in November of 1963 on display at the Willie Nelson and Friends Museum.

Although 36 years have passed, we continue growing thanks to our loyal customers. At more than 10,000 square feet we now have the largest gift shop and museum in Nashville dedicated to traditional country music.

The Willie Nelson and Friends General Store now offers Nashville’s largest selection of gifts and souvenirs. We’re located at 2613 McGavock Pike (directly across the street from the Gaylord Opryland Hotel) and we can be reached at 615-885-1515 or on the web at WillieNelsonGeneralStore.com, facebook.com/WillieNelsonMuseum and twitter.com/WillieMuseum.