Entertainer of the Year for 1979 – Willie Nelson.  In case you’ve never read it, this is a reprint of a great article that was originally written by Michael Bane following Willie Nelson’s win of the highest award in country music.

In 1979 the Country Music Association ratified what everybody already knew: Willie Hugh Nelson was named Entertainer of the Year, the highest award country music can give. 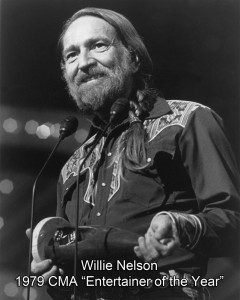 Of the five nominees — Kenny Rogers, Barbara Mandrell, the Statler Brothers and Crystal Gayle — Willie was probably the dark horse. The clear favorite was Kenny Rogers, riding the huge success of ‘The Gambler.”

After sitting through the entire awards show and watching Kenny Rogers grab every award in sight, Willie figured he was off the hook.

“I thought Kenny was about to clean sweep,” Willie says. “So I was surprised. I was shocked.” He was wearing his usual jeans and a neat cowboy shirt, his long hair pulled back in braids. He took the microphone and thanked the audience modestly, started to turn away, then turned back to the audience.

“When you talk about entertainers,” Willie said, “Entertainers for years, not just one year, but entertainers over the years — I like to think about people like Little Jimmy Dickens, Faron Young, Ferlin Husky and all those people, and “I’d like to see these guys up here one of these years, because they certainly deserve to be.”

The applause was deafening.

Later, he was asked if he thought he was singing with more confidence. He paused for a long time before he answered.

“Yes, there’s a lot to that,” Willie said. “There were a lot of years when I felt like I was singing to myself. A lot of times I was. There was me and two couples out on the dance floor, and that was it. The crowds have gotten bigger, and as the crowd gets bigger, your confidence grows. Maybe you’re doing it right.”

Again, it seemed that Willie Nelson’s career couldn’t get any bigger. Even The New York Times gushed the praises of the leather-tough singer from Texas.

“He plays with the vibrant enthusiasm of a Fats Waller,” wrote Al Rheinhart in the Times, “With the gleeful fulfillment of an artist who has finally found his audience, and through them, himself. He is truly happy to be there, playing is music, and it shows.”

“An objective look at the present state of Willie Nelson’s nearly three-decade-long career indicates that he not only learned form the error of his ways, but he’s in fact gone a step further and turned them all into triumphs,” wrote Willie-watcher Bob Allen in country Music Magazine in 1980.

“For at least the last three years, some journalists have been predicting that his career was bound to peak any second now, and that it would all be downhill from there.

But the fact is it just seems to be gaining more and more momentum, almost by the day, and his universal popularity continues to grow.”

Willie, as usual, was philosophical — “I feel like I’ve made all the mistakes,” he says, “and I hope I’ve learned from them.”

Leave Entertainer of the Year page – return to Home page