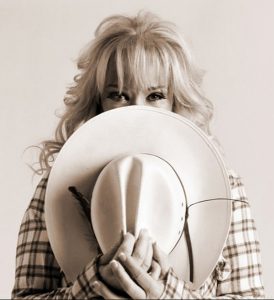 Tanya Tucker achieved top-ten success as a country singer when she was only 13 years old in 1972. That year, her distinctive, tremulous, powerful voice was heard singing the memorable tale of a woman who was “forty-one and her daddy still calls her baby. All the folks around Brownsville say she’s crazy, ‘cause she walks downtown with a suitcase in her hand, looking for a mysterious dark-haired man…”

The unusual story song was “Delta Dawn,” written by Larry Collins and Alex Harvey. After the public’s shock wore off when they learned that the powerful vocal delivery came from a 13-year-old girl, Tucker went on to have a long successful career in country music, developing a sexy rebel image. The never-married star also had, in the early 1980s, one of the most famous and gossiped-about romances in country-music history—with fellow singer Glen Campbell.

Tanya Denise Tucker was born on October 10, 1958, in Seminole, Texas. Her father was a construction worker and did other jobs, moving around the country a great deal for work. Tanya and her three siblings lived in Texas, Arizona, Utah, and Nevada while growing up. Tanya showed an early interest and ability in singing, which her parents encouraged. One of her first performances was at the Arizona State Fair. After the family moved to Nevada, she sang at Las Vegas venues.

A demo tape recorded by Tucker and sent to Nashville in 1971 found its way to Columbia Records producer Billy Sherrill. Sherrill liked what he heard and signed the youngster to a contract. Their first release was “Delta Dawn,” which rose to number six on the country charts in 1972 and also entered the pop charts. In 1973, Helen Reddy had a number-one pop hit with her version of the song.

Tucker scored her first number-one country single in 1973 with another edgy story song, called “What’s Your Mama’s Name.” She reached the top of the charts again in 1973 with the David Allan Coe-penned sexy love ballad “Would You Lay With Me (In a Field of Stone)” and with the dark honky-tonk murder tale “Blood Red and Goin’ Down.” In 1974, “The Man That Turned My Mama On” offered more daring adult material from the young singer.

In 1975, “Lizzie and the Rainman,” a musical version of the 1956 Burt Lancaster movie The Rainmaker, peaked at the top of the country charts and also entered the pop top forty. “San Antonio Stroll” was an old-fashioned happy song that was Tucker’s fifth number-one hit, in 1975. In 1976, the teen singer again showed her sensuality with “Here’s Some Love.” In 1977, “It’s a Cowboy Lovin’ Night” revealed more of Tucker’s fun side.

Tucker celebrated her twentieth birthday in 1978 with the risque album cover of TNT, showing her wearing tight black leather pants with a microphone cord pulled up between her legs. This album had an edgier, sassier, and more rock-flavored sound than her previous efforts. “Texas (When I Die)” became the biggest hit off the album, rising to the fifth position on the country charts.

During the early and mid-1980s, Tucker experienced fewer chart successes as she seemed to struggle for a new musical footing and flirted with a pop career. She also flirted with and dated a series of famous male singers and actors. She came to be in the news more for her wild, hard-drinking, cocaine-fueled lifestyle than her music.

The relationship that captured the public’s imagination the most was her brief but torrid romance with Glen Campbell, which lasted for more than a year from 1980, around the time that Campbell divorced his third wife, to 1981. The two broke up after Campbell met Kim Woollen, whom he married in 1982 and with whom he would remain married the rest of his life.

Tucker and Campbell recorded together during their romance, getting a minor hit in 1980 with their duet remake of Bobby Darin’s “Dream Lover.” Tucker has always claimed that Campbell was the one true love of her life. After he died of complications from Alzheimer disease in August 2017, she told a reporter that she was “absolutely devastated.” She released a single dedicated to Campbell titled “Forever Loving You.”

Tanya and Glen sing “Dream Lover” together during the height of their romance.

By the late 1980s—after therapy for her drug and alcohol use—Tucker found herself back on the country charts with such tunes as “If It Don’t Come Easy,” “Strong Enough to Bend,” and “My Arms Stay Open All Night.” She had more top-ten hits in the 90s, such as “Two Sparrows in a Hurricane,” “It’s a Little Too Late,” and “Hangin’ In.” In 1991, the Country Music Association named Tucker as Female Vocalist of the Year. In 1994, she performed in the half-time show at Super Bowl XXVIII.

In 2005 and 2006, she had a reality TV show on TLC titled Tuckerville. The show focused on the relationships of Tucker with her three children, whom she had in relationships with actor Ben Reed and musician Jerry Laseter.

In 2014 and 2015, the Country Music Hall of Fame honored Tucker with a special exhibit of her personal belongings, including her pink Harley Davidson motorcycle. In 2016, she was honored by the Academy of Country Music with the Cliffie Stone Pioneer Award. In 2017, Rolling Stone named Tucker as one of the 100 Greatest Country Artists of All Time.

Tanya singing “Forever Loving You,” the song she wrote to honor Glen Campbell in 2017.

Allison Stewart. Tanya Tucker on former flame Glen Campbell: ‘It was a love that will never be again.’ Chicago Tribune. October 29, 2015.

In addition to Tanya Tucker, the displays and exhibits you’ll see at the Willie Nelson and Friends Museum  honor other country music legends including: