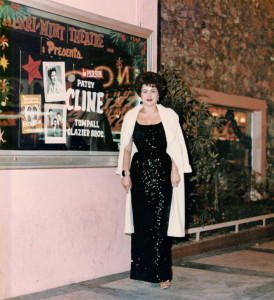 The great Patsy Cline standing in front of the Merrimint Theatre in Las Vegas where she performed along with the TomPall Glazier Brothers.

Patsy Cline was one of the greatest singers in the history of country music. She also helped blaze the trail for other female singers in the male-dominated Nashville country music industry during the late 50’s and early 60’s. She was not alone in this regard; Kitty Wells also had become a star several years before Patsy Cline’s big hits in the early ’60s.

However Patsy Cline has the most legendary aura of any female country singer, perhaps due to an early death that cut her off just after she had entered her prime.

Cline began recording in the mid 1950s, and although she recorded quite a bit of material between 1955 and 1960 (17 singles in all), only one of them was a hit. That song, “Walkin’ After Midnight,” was both a classic and a Top 20 pop smash. She couldn’t follow up “Walkin’ After Midnight,” however, in part because of an bad record deal that limited her to songs from a single publishing company.

But things took a radical turn for the better in 1960 when that initial contract expired. With the help of legendary producer Owen Bradley (who had worked on her sessions all along), Patsy began selecting material that was both better suited to her abilities and of a higher quality than her previous recordings. 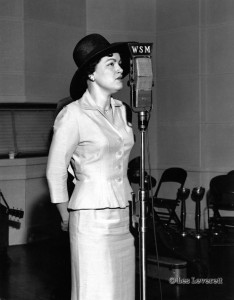 Her great song, “I Fall to Pieces,” was cut at the very first session where Patsy was at liberty to record what she wanted, and it was the turning point in her career. Reaching number one in the country charts and number 12 pop, it was the first of several country-pop crossovers she was to enjoy over the next couple of years.

More important, it created a model for commercial Nashville country music at its best. Owen Bradley crafted sharp orchestral arrangements, with weeping strings and backup vocals by the Jordanaires.

The country sounds were provided by the cream of Nashville’s session musicians, including guitarist Hank Garland, pianist Floyd Cramer, and drummer Buddy Harmon. Cline’s voice sounded richer, more confident, and more mature, with ageless wise and vulnerable qualities that have enabled her records to maintain their appeal with subsequent generations. 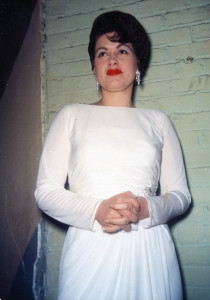 The last living photo of Patsy Cline backstage at a show in Kansas City, MO on the night of her plane crash on display at the Willie Nelson and Friends Museum.

Despite a severe Nashville auto accident in 1961, Cline remained hot through 1961 and 1962, with “Crazy” and “She’s Got You” both becoming big country and pop hits. Much of her painfully romantic material was supplied by fresh songwriting talent like Hank Cochran, Harlan Howard, and Willie Nelson (who wrote “Crazy”).

Unfortunately, while still at the top of her game she died tragically in a plane crash on the way to a performance in March of 1963, at the age of 30. Also killed in the crash were Hawkshaw Hawkins, Cowboy Copas and manager, Randy Hughes.

Although only a big country music star for a couple of years, Patsy’s influence has remained and grown during the years since her death. As the first female solo artist inducted into the Country Music Hall of Fame, Patsy had a string of hits including “Walking after Midnight”, “I Fall to Pieces”, “She’s Got You”,“Sweet Dreams” and of course, “Crazy” which remains the #1 song played on jukeboxes across the globe. 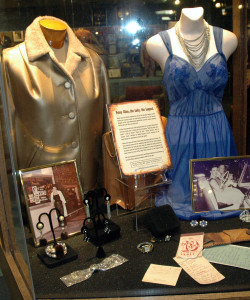 In Patsy’s honor, we’ve created a special display in the Willie Nelson and Friends museum dedicated to Patsy Cline.

The display contains some of Patsy Cline’s last remaining personal items. Notable among them are the wedding day photo of her and her new husband, Charlie Dick, along with clothing, jewelry and her handwritten notes.

We’re very excited to be able to offer this glimpse into Patsy Cline’s life and want to thank Charlie Dick and Patsy’s children, Julie and Randy, for allowing us to share these special treasures with all of you.

In addition to Patsy Cline, the displays and exhibits you’ll see at the Willie Nelson and Friends Museum honor other country music legends including: