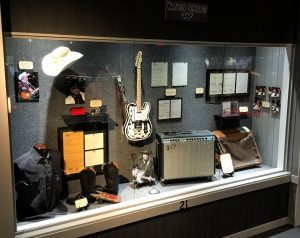 The new Waylon Jennings exhibit now on display at the Willie Nelson and Friends Museum in Nashville, TN.

We’re very proud to offer so many great Waylon Jennings personal items for visitors to enjoy. The exhibit has been a couple of years in the making to ensure we were able to assemble just the right memorabilia for everyone to enjoy.

Waylon Jennings was a great musician who leaves a huge legacy in the music industry. It’s tough to capture all of that in a single exhibit but we have tried. We think you will really enjoy it.

You’ll have to visit us to fully appreciate the display and the story it tells. However, here’s a sampling of some of the great memorabilia you’ll almost be able to reach out and touch:

There’s a whole lot more to see but you’ll have to come to Nashville to really experience it. We look forward to seeing you real soon. if you would like to read more about Waylon Jennings then visit our page about him located here.