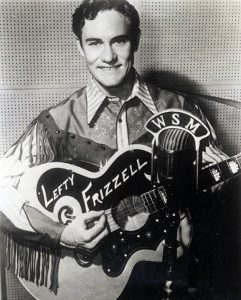 Lefty Frizzell was one of the most influential singers in the history of country music. Charting most of his self-penned hits during the 1950s, his singing and musical stylings served as templates for later stars ranging from George Jones, Merle Haggard, and Willie Nelson to Randy Travis, George Strait, and Daryle Singletary.

He is sometimes described as the “greatest honky tonk singer,” though his music covered a much wider range than just honky tonk.

William Orville Frizzell was born on March 31, 1928, in Corsicana, Texas. His family travelled a lot, from Texas to Oklahoma to Arkansas, as his father sought work as an oil driller. When still a boy, Frizzell came to idolize country music pioneer Jimmie Rodgers, listening to his records and trying to duplicate his sound on a guitar that his uncle gave him.

When he was 12, he began singing on a radio show in Texas. He reportedly got his nickname “Lefty” in his early teens after impressing his peers in a schoolyard fight.

Plying his musical craft in honky tonks and at parties and barn dances in Texas and New Mexico during the late 1940s, Lefty developed his own unique style, characterized by fluid, highly expressive phrasing. He began writing songs while serving six months in jail on a statutory rape conviction. By 1950, he was a regular performer at the Ace of Clubs in Big Spring, Texas. 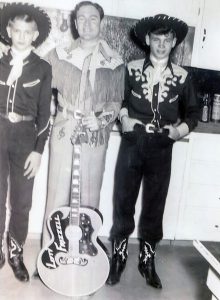 Lefty Frizzell standing alongside the very young Everly Brothers in their kitchen.

Columbia Records signed him as a singer and writer on the strength of his song, “If You’ve Got the Money, I’ve Got the Time.” That song was released as a single in July 1950 with “I Love You a Thousand Ways” on the flip side.

At one point in 1951, he simultaneously had four songs in the top 10—an unprecedented accomplishment. During 1951 and 1952, Frizzell and Hank Williams toured together. They flipped a coin to determine who would go on stage first for any show.

Frizzell’s chart success stalled after 1952, and he had only two more top-10 hits—“Long Black Veil” in 1959 and “Saginaw, Michigan” in 1964. The latter song reached number-one on the country charts, crossed over to the pop charts, and was nominated for a Grammy Award. His 1965 song “She’s Gone Gone Gone” was popular but failed to crack the top 10.

Although lacking new radio hits, Frizzell’s live performances remained popular. He had a very engaging stage persona with an excellent sense of humor. He continued to tour, mainly in California, where he had moved in the early 1950s. He also performed often on a California-based television show called Town Hall Party. He moved back to Nashville in the early 1960s after Town Hall Party was cancelled.

Recording for ABC Records in the early 1970s, Frizzell produced what many of his fans still consider some of his best material, including “I Never Go Around Mirrors” and “I Can’t Get Over You To Save My Life.” However, none of the songs managed to reach the top 10. He was inducted into the Nashville Songwriters Hall of Fame in 1972. Lefty’s song “That’s the Way Love Goes” became a number-one hit for Johnny Rodriguez in 1973.

“I Never Go Around Mirrors”

Frizzell always had a reputation as a wild, flamboyant, free-living guy. He loved women and he loved flashy clothes. According to the Rockabilly Hall of Fame, he was the first country singer to wear rhinestone suits on stage. 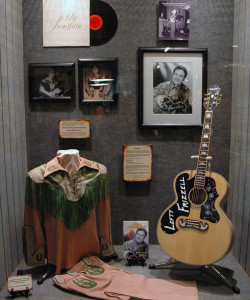 Some of the personal memorabilia from the great Lefty Frizzell on display at the Willie nelson and Friends Museum.

He was also a heavy drinker. His drinking worsened and his health declined as his career weakened. He developed high blood pressure, which he had medication for, but he usually preferred to drink rather than take his meds. His wife filed for divorce in 1975, adding to his woes. Less than three months later, on July 19, 1975, after a night of excessive drinking, he died from a massive stroke in Nashville. He was only 47 years old.

Frizzell’s legacy was carried to a younger generation of country music fans in 1977, when Willie Nelson released To Lefty From Willie, an album of Nelson’s renditions of Frizzell’s songs. In 1982, Frizzell was elected into the Country Music Hall of Fame. In 1998, his career was also honored with the Grammy Hall of Fame Award.

Frizzell’s younger brother David is a country singer who had a number of hits in the 1980s, including “I’m Gonna Hire a Wino (To Decorate Our Home)” and “You’re the Reason God Made Oklahoma” (a duet with Shelly West, the daughter of Dottie). Frizzell’s youngest brother, Allen, who married Shelly, is a country-gospel singer. Lefty’s son Crockett is also a singer who, like his father, was inducted into the Rockabilly Hall of Fame.

A great book about Lefty written by his brother, David. it’s titled, “I Love You a Thousand Ways”.

In addition to Lefty Frizzell, the displays and exhibits you’ll see at the Willie Nelson and Friends Museum  honor other country music legends including: