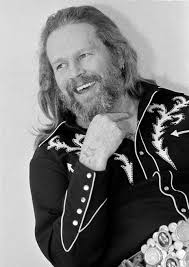 David Allan Coe is a man of stark personal contrasts, a highly creative artist, and one of the most unique, eccentric personalities in the history of country music. A large man with long hair, tattooed arms and tough-guy demeanor. Coe spent several years spent in prison and obtained membership in the Outlaws motorcycle club.

David Allan Coe appeared to be more of a real “outlaw” than any of the other singers in country music’s 1970’s outlaw movement. For a while, he performed wearing a black mask and called himself “The Mysterious Rhinestone Cowboy.”

Yet, he is also a songwriter of extreme sensitivity who has crafted some of country music’s most moving love songs. Other sides of his writing are comedic, purposefully insulting, and crudely sexual. He has continued to write, record, and tour for decades in his own strange and special style. It is safe to say that country music will never see another artist like D.A.C.

David Allan Coe was born in Akron, Ohio, on September 6, 1939. He was a rebellious, misbehaving boy who, beginning at age 9, spent much of his youth in reform schools and correctional facilities. 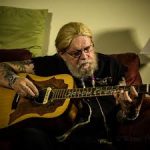 As a young man in his 20s, he repeatedly got into serious trouble with the law for such crimes as burglary and auto theft, and he spent about five years serving time in Ohio State Penitentiary and Marion Correctional Institution. Coe later claimed that he was on death row for killing a man in prison. It should be noted, however, that Coe has always had a habit of telling fascinating stories that embellish his biography while not necessarily being true.

He also later claimed that while in prison, he met singer Screamin’ Jay Hawkins (of “I Put a Spell on You” fame), who urged him to write songs and pursue a career in music. (Yet another claim was that Coe taught Charles Manson how to play guitar.)

After being released from prison in 1967, Coe headed to Nashville, Tennessee, to take his shot at that music career.

The homeless David Allan Coe lived in a red Cadillac hearse after arriving in Nashville. On weekends, he parked the hearse in front of the Ryman Auditorium, home of the Grand Ole Opry, hoping to get noticed. The hearse was emblazoned with his name and “SUPPORT THE GRAND OLE’ OP’RY.”

He soon did get noticed. His writing and singing talents landed him a contract with an independent label called SSS International, which released his first album, a blues-based collection titled Penitentiary Blues, in 1969.

His songwriting generated more interest than his singing. An intelligent, gently touching ballad he wrote titled “Would You Lay With Me (In a Field of Stone)” became a number-one country hit for Tanya Tucker in 1974. This success prompted Columbia Records to sign Coe as a writer and singer. Coe’s first Columbia album, 1974’s The Mysterious Rhinestone Cowboy, was critically acclaimed but failed to produce any chart hits. Today, the album is viewed as a ground breaker in “alternative country.”

Tanya Tucker’s hit version of Coe’s “Would You Lay With Me (In a Field of Stone).”

Coe’s first chart success as a singer came with his 1975 album Once Upon a Rhyme. A humorous Steve Goodman- and John Prine-penned song from that album titled “You Never Even Called Me By My Name” rose into the top ten. In the song, which was a satire of “the perfect country and western song,” Coe characteristically (with his tendency to exaggerate) claims a key role in the song’s writing. Once Upon a Rhyme also included the Coe tearjerker “Jody Like a Melody.”

Coe’s first hit recording, “You Never Even Called Me By My Name.” 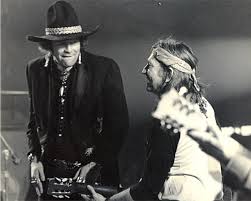 David Allan Coe became identified with the outlaw movement of the 1970s. However, while Waylon, Willie, and the other “outlaws” were known for rebelling against the Nashville music establishment, Coe often seemed to be rebelling against social convention in general with his outlandish (for that time in country music) behavior.

With his mysterious rhinestone cowboy persona, he sometimes performed wearing a gaudy black rhinestone-studded suit, big black cowboy hat, and black mask over his eyes, accessorized with a pair of silver skull earrings. He sometimes rode his Harley onstage as he shouted cuss words at the audience, which cussed back at him.

He was the first country singer to regularly perform on stage with an all-female backup vocal group, called Ladysmith. In the 80s, he began incorporating magic into his stage shows. At one point, Coe owned seven Cadillacs. He also once claimed to have the same number of wives, saying that he was a Mormon who believed in polygamy.

Coe performing “Long-Haired Redneck” in his flashy rhinestone suit on stage in 1975.

Despite Coe’s many recordings and eccentric antics, his best-known accomplishment is probably one song he wrote that became a hit for someone else. Coe’s “Take This Job and Shove It” was a monster hit for Johnny Paycheck in 1977 and 1978. The song struck a powerful chord with many working people, who could relate to the lyrics about a guy who just can’t stand his dead-end job anymore and tells his boss where to put it.

Coe has always courted controversy, perhaps nowhere as much as on two independently released “underground” albums in the late 70s and early 80s. Many of the songs on these albums, though humorous, seemed purposefully designed to shock and stoke anger within the music industry, burnishing Coe’s reputation as an independent-minded rebel and outlaw. 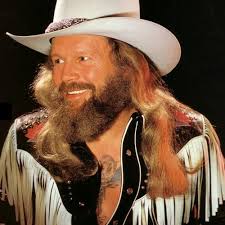 Photograph of David Allan Coe in hat and stage outfit before a concert.

The 1982 album, Underground Album, was in a similar comedic, vulgar vein. One crudely titled song on the album led to charges of racism, to which Coe responded by proclaiming that anyone who “says I’m a racist is full of s—.” Those who best understand Coe and his music note that people who consider Coe a bigot of any kind simply do not understand his over-the-top use of humor and satire in his songs.

Coe’s career entered the twenty-first century by strengthening his ties to rock music. He toured as Kid Rock’s opening act in 2000. Kid Rock’s 2003 self-titled album included the Coe-penned song “Single Father,” which became a minor hit on the country charts.

In 2006, Coe and members of the metal band Pantera released the album Rebel Meets Rebel, which featured a highly unusual mix of country and metal sounds. The songs on the album were recorded several years earlier, but the final product was not released until two years after Pantera guitarist and Coe’s friend Dimebag Darrell was shot to death on stage. The collection included the song “Get Outta My Life,” which featured country metalhead Hank Williams III.

Coe, in a long wig, with Pantera members on “Nothin’ To Lose.”

The 73-year-old Coe survived a serious automobile accident in March 2013 with head trauma, broken ribs, and bruised kidneys. Despite his injuries, he performed at Willie Nelson’s Fourth of July picnic a few months later.

In addition to David Allan Coe, the displays and exhibits you’ll see at the Willie Nelson and Friends Museum  honor other country music legends including: