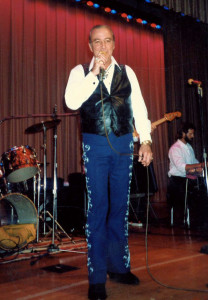 The singing sheriff, Faron Young, performing on stage in Nashville at one of his many concerts.

Faron Young was one of country music’s great honky tonk singers. Known as the “Singing Sheriff,” he charted a series of hits from the early 1950s into the 1980s. He personified a generation of country singers who often lived wild lifestyles similar to those they sang about—and whose music contained an authenticity that many regular folks could instantly relate to.

Faron Young was also a successful businessman and the co-founder of Music City News, which was the top trade publication in country music for 37 years until its closing following the publication of the February 2000 issue. (Music City News had been previously purchased by the Gannett news organization). And many writers and singers who went on to their own fame received early career boosts from the big-hearted Young.

Faron Young was born on February 25, 1932, in Shreveport, Louisiana. He grew up on his father’s dairy farm just outside the city. He started playing guitar while still a boy, and he was singing in a local country band by the time he was in high school.

After briefly attending Centenary College in Shreveport, he decided to make a career out of music. His first widespread exposure came after he became a regular performer on the popular Louisiana Hayride radio program on KWKH.

While singing on the Louisiana Hayride, Young met Webb Pierce, and the two struck up a friendship as well as a working relationship. They toured as a duo through the honky tonks of the South, burnishing their credentials and honing their styles. Both were strongly influenced by Hank Williams. 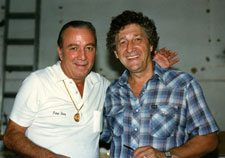 Young’s big recording break came after an independent label called Gotham released his “Have I Waited Too Long” and “Tattle Tale Tears” in 1951. Upon the strength of those sides, Capital Records bought out his contract in 1952. His first hit for Capital came that year with “Goin’ Steady.”

That same year, he began performing on the Grand Ole Opry, substantially raising his public profile. He was drafted into the Army in late 1952, and he served two years in the Entertainments Unit, performing for U.S. troops.

Young had his first number-one single in 1955 with “Live Fast, Love Hard, Die Young,” which was followed up with the number-two “All Right.” The mid-‘50s through mid-‘60s also saw Young, who was then something of a country sex symbol, acting in several movies with western or country-music themes. In two early films, he played a deputy and a marshal. Hence, the origin of his nickname, which was originally the “Young Sheriff.”

In 1956, Young scored major hits with “I’ve Got Five Dollars and It’s Saturday Night,” “I Miss You Already (and You’re Not Even Gone),” and “Sweet Dreams.” The latter tune, which was the first big success for songwriter Don Gibson, scaled up the charts to the number-two position. 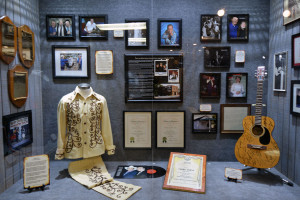 Young’s knack for tapping into new songwriting talent showed again in 1958, when he had a number-one hit with Roy Drusky’s “Alone With You”; in 1959, when he topped the charts with Drusky’s “Country Girl”; and in 1961, when he went to the top of the country charts and entered the pop charts with Willie Nelson’s “Hello Walls.”

That song became the first #1 hit ever produced by Willie Nelson when he was a young, struggling Nashville songwriter. Watch and listen as Willie and Faron are telling the story behind the #1 hit, “Hello Walls”.

Faron also helped another unknown, young songwriter/janitor named Kris Kristofferson by hiring him as a laborer. Roger Miller and Johnny Paycheck also played in Faron’s band early in their careers helping them to get noticed and gain exposure to a broad base of country music fans.

More music and business too

During the rest of the ‘60s, as honkytonk music fell out of fashion in Nashville, Young’s music tended to take on more of a country-pop sound. Among his hits during this decade were “The Yellow Bandanna,” “You’ll Drive Me Back (Into Her Arms Again),” “Walk Tall,” and “Wine Me Up.” By 1969, he had charted a total of more than 60 country hits.

One of Young’s most memorable recordings is 1971’s “Its Four in the Morning,” a waltz that proved to be his final number-one hit on the country charts and another pop crossover hit. Other popular songs in the 70s were “Step Aside,” “Leavin’ and Saying Goodbye,” “This Little Girl of Mine,” and “Some Kind of Woman” (his last top-ten hit, in 1974).

Faron’s “Some Kind of Woman,” which reached number-eight on the country charts in 1974.

Young’s last charted songs were “Stop and Take the Time” and “Here’s to You” in 1988. In 1991, he released a duet album with Ray Price titled Memories That Last. Young’s last released album was Live in Branson, in 1993. 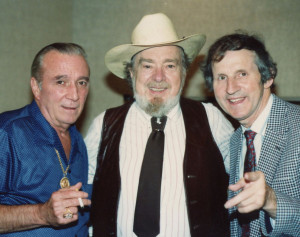 In addition to recording in the studio and touring throughout the United States and Western Europe, Young also appeared as a regular guest on country-music television programs, such as Ralph Emory’s Nashville Now.

He was an entertaining storyteller, and he had plenty of stories to share. However, his bluntness sometimes riled the Nashville establishment, and his colorful language sometimes had to be edited out of interviews. Also causing controversy over the years were some of his alcohol-fueled antics, such as brawling and shooting his gun in Nashville bars.

Young launched his entrepreneur career in 1963 when he co-founded Music City News with Grand Ole Opry promoter Preston Temple. He later sold the periodical to the Gannett News organization.

Faron and Ray Price performing Willie’s “Funny How Time Slips Away” in the early ‘90s.

Young struggled with serious health problems during the 1990s, especially severe emphysema and prostate troubles. The health problems led to depression. On December 9, 1996, a friend found him in his Nashville home with a gunshot wound to his head that was apparently self-inflicted. A suicide note was also found. Faron died the next day at a Nashville hospital.

Faron Young was inducted into the Country Music Hall of Fame in 2000. 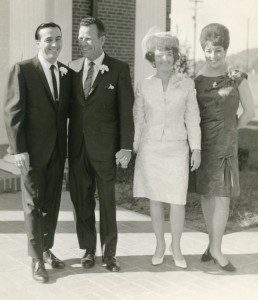 Faron Young as “best man” at the wedding of General Store co-founders Frank and Jeanie Oakley in 1966.

Faron was more than a great musical talent. To the Willie Nelson and Friends General Store and Museum, Faron was a great friend of the family. On October 13, 1966, he served as the best man at the wedding of the museum’s founders, Frank and Jeanie Oakley.

After the museum was founded in 1979, Faron became a frequent visitor, often dropping by to sit and chat with Frank and Jeanie. The three loved to reminisce about the uniquely colorful past of Nashville and its many memorable characters. Frank shared many of these memories in his book, The Nashville “Sidekick,” which was published by the museum in 2006.

In Faron’s honor, we’ve created a special display in the Willie Nelson museum dedicated to Faron Young. We also have a lot of photos of him scattered throughout the store and museum. So be sure and stop in – you’ll love it if you’re as much of a Faron Young fan as we are.

Faron biography, at the Country Music Hall of Fame

Faron biography, from The Encyclopedia of Popular Music, edited by Colin Larkin

In addition to Faron Young, the displays and exhibits you’ll see at the Willie Nelson and Friends Museum  honor other country music legends including: